Just Because I Can, Doesn’t Mean I Should 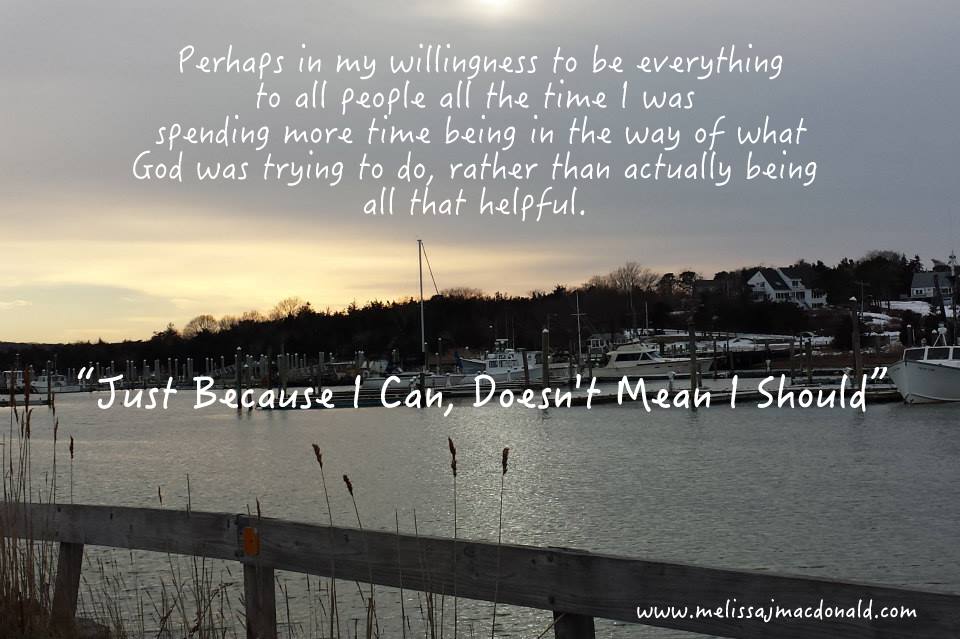 “Just because I can, doesn’t mean I should.”

That has been my phrase for a while now. I first started using it after I had lost some weight. I was able to fit into all sorts of new outfits and sizes and I found myself wanting to buy them all. On one particular day, I found myself in the junior’s section dressing room looking like I had been dressed, and subsequently attacked, by middle school girls. It was there I had a stern talk with myself. “Just because you can, Mel, doesn’t mean you should.”

That phrase took on new meaning for me during my “desert” season; my time of waiting and wandering and blindly following my Jesus. I was in-between jobs. Well, truthfully, I had quit one job with nothing on the horizon. Not exactly what most people would consider to be wise, but it was what Jesus called me to do. So I moved to Iowa from Vienna, Austria to take up residence with my parents while I waited for what God had for me next. In my waiting I painted houses, chopped fruit at the grocery store, and worked as an online professor. Those are just three of the nine jobs I was working. In the midst of that, I kept turning down viable career opportunities. Again, not exactly what most would consider wise, but my Jesus kept whispering in my ear, “just because you can, doesn’t mean you should. I have something more for you.” So I walked forward in faith. Little did I know all that God was preparing me for.

I often find myself saying, “no,” “thanks, but no thanks,” “I’m not interested,” “that’s not my sweet spot,” and “I don’t have the time for that.” There’s something so settling within my soul about saying, “just because I can, doesn’t mean I should.” It’s the settling of my soul that has come to the place where I can admit I am who I am, and I don’t have to be everything to all people all the time. I’m gifted, I’m called, and I’m good at what I do, but first and foremost, I’m His. I spent years being frantic and burning myself out on “good” things. I spent enough years there to know I’m not going back. I care more about tuning my ear to His voice than I do about doing all that I can do. In my willingness to step aside and say no, who knows who God is preparing to step in and up? And maybe, just maybe I was spending more time being in the way of what God was trying to do than actually being all that helpful.

So I step out of the junior’s section, I continue to turn down frequent viable career offers, and I keep listening to my Jesus. What I repeat, and what so often is the echo of what He’s saying to me is, “just because I can, doesn’t mean I should.”

Where do you need to say that phrase today?

This blog was republished with permission. To read more from Melissa, check out her website http://www.melissajmacdonald.com/

Melissa MacDonald
The daughter of a pastor and the oldest sister of 3 Melissa grew up doing ministry with her family. Melissa herself has been a children’s pastor and missionary. Passionate about the church and about kids she travels extensively speaking, training, coaching, and consulting. She currently serves as the national Children’s Disciplemkaing Specialist for the Christian and Missionary Alliance denomination. She’s been to over 30 countries and seeks out the best ethnic food in every city she visits.