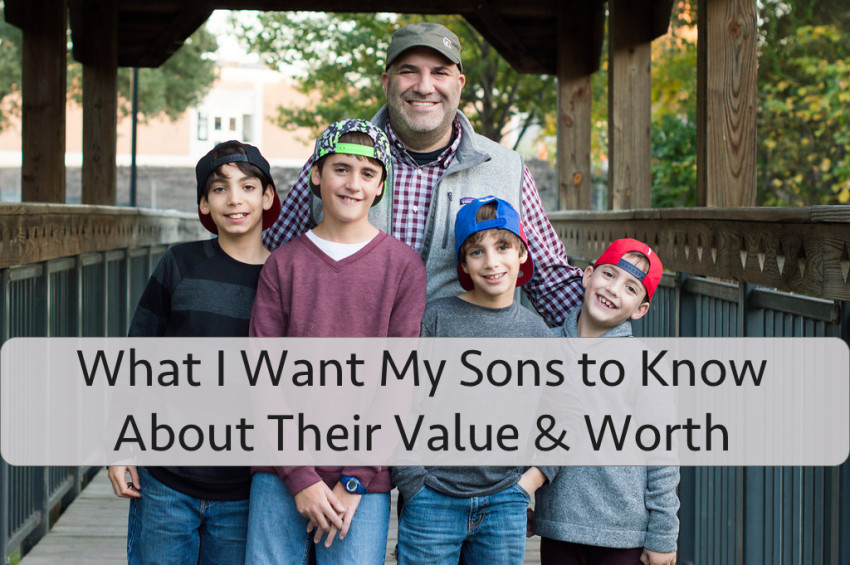 My friend Samantha Krieger just wrote a post called What I Want My Daughters to Know About Beauty & Worth. I recommend you read her post and subscribe to her blog. She is one of the best writers I know and you don’t want to miss what she has to say, especially for the wives and moms out there.

I don’t have any daughters, yet I found myself drawn into this post. Partly because I know the world gives women a very false message about beauty, and women live under an immense amount of pressure to live up to some false, air-brushed standard. I can’t imagine the pressure many/most women feel to do everything they can to make sure their daughter doesn’t grow up believing the lies.

The other reason I was so drawn to this article has very little to do with beauty and worth. Rather, as the dad to four boys, I desire for my boys to have the right message about masculinity and worth. While the battle/struggle for boys and girls might be different, the fight is still over their value and worth.

My kids are at a sweet age right now. The twins are almost 12, our middle boy is nine and our youngest is seven. They can do a whole lot by themselves, they are fun to play and talk with, and they still think I’m the greatest guy on the planet. I know someday (probably soon!) this will change, so I am enjoying it in the moment. This is the perfect season for me to drive home the lessons they need to learn about their value and worth. I know as my twins start junior high in the fall, their world will be shaken like never before.

A few years ago, I read the book Season of Life, by Jeffrey Marx. The book tells the story of Joe Ehrmann, a former NFL player who now spends his days teaching young men about a whole new meaning of masculinity. In the book, Marx shares the world’s definition of masculinity and how it centers around athletic prowess as an elementary/middle school boy, sexual conquest as a high school/college young man, and financial success as a young adult/man.

As I watch my boys grow older and older, I see these things being lived out in front of my eyes. The most “popular” elementary boys seem to be the ones with the most athletic ability, and as my twins get ready to enter into junior high next year, I know sexual tensions rise like crazy in these pre-pubescent, adolescent boys and girls. And as I watch young adults, I see the prestige that comes with nicer cars, bigger homes, and more powerful job titles.

And everything in me wants my boys to know that their value and worth is not tied into their athletic ability, sexual conquests, or financial success. I long for them to know they are loved by their mom and dad, and are loved even more than they can imagine by the God of the universe. I want them to know that Jesus died for them, that their value and worth is defined by His finished work on the cross of Christ, not by baskets scored, notches on the bedpost, or digits in their bank account.

I want my boys to know:

This blog and image was republished with permission from: http://www.scottkedersha.com/blog/

Scott kedersha
Scott Kedersha is the Director of Premarital and Newly Married Ministries at Watermark Community Church in Dallas, Texas. He’s been married to Kristen since 2001, has four boys, and blogs on marriage & family, ministry, and premarried relationships at Scottkedersha.com.